I'm one of those A-type-first-child personalities who grew up feeling like it was absolutely necessary to be good at everything I did. I honestly didn't feel any external pressure, but rather, a heavy sort of internal pressure to make everyone happy, to get s&*t done, to succeed. And generally, I did. It may not have come easy to me but I worked hard, really hard, and my teachers--and later, my bosses--had good things to say.

Last year, I got my first negative review at work. It was a few months after I had decided that I was leaving the law to go back to teaching, but still, it stung. Or maybe more than stung. Okay, it hurt.

It hurt for several reasons, including the one reason I want to write about tonight -- it hurt because it was so unbelievably and undeniably true. The oh-so-true part of the feedback was that I get "easily distracted." To be honest, I remain stubborn in my opinion that I did every assignment I was asked to do within the time frame that I was asked to do it, but I concede that the feedback is 110% accurate. And I couldn't be more thankful for having received it.

The truth is, that with the exception of my pro bono immigration work, I have never not been distracted at my lawyer-jobs. When I started at Ropes & Gray, I was distracted by my seven-month old and by trying to maintain a healthy marriage through the turbulent time of transitioning to a demanding and unpredictable schedule. I was distracted by things as small as lunch and snacks to things as significant as my grandmother being ill and dying before my eyes. I was distracted by Scott's passing and by far too many other tragic deaths that followed. I was distracted by an infant who had a never-ending ear infection and who projectile vomited on countless rides to day care. I was distracted by family struggles and celebrations, and by trying to help other people through tough times. I was distracted by wanting to always talk to my office-mate who I loved (and drove nuts), and I was distracted by the realization that when it came down to it, I hated the professional life I had created for myself. I hated the motion-sickness that plagued me on the cab-rides home from the office after midnight and I hated the absolutely awful exit gate in the lower parking lot of the Route 128 train station which often failed to open at the most inconvenient times and thus made me wonder if one day I would just drive straight through it in protest (I confirmed last week that it's still broken). Most of all, I hated that the work day (and night) made me feel like I was dying inside. Like the fire I used to have in me was gone.

Once I moved to a so-much-more-humane law firm culture, I was still distracted, then by a baby girl who I loved as much as I loved her older brother, which I never thought could be possible. I was distracted by books and even by a little bit of exercise. I was distracted by the news that I hadn't followed in years and by wide-awake dreams I started to have again. I convinced myself that everything was good again--that I could succeed as a lawyer in this new place. But deep down, I think I knew I was pretending. Then, on August 8, 2012, I became so distracted by an out-of-the-blue cancer diagnosis that I barely knew what day of the week it was or what planet I lived on.

I tried to fake it at first (not even consciously realizing that I was faking anything). I returned to the office after my first chemo infusion convinced that I would try to work--at least part-time--through my treatment. But then I was allergic to the Taxotere and had my world flipped upside down again. After that, I tended towards far-too-few white blood cells and each chemo round felt like an extremely dangerous adventure. I gave up all my corporate work and focused only on Wendy's asylum case. I couldn't find it in myself to focus on any other work beyond that. I should have known then--if not five years before--that I was wasting away in a place that I didn't belong. I was dying inside, perhaps too literally for it to even be an ironic thing to say. But I was also coming alive.

I read the following quote in a book recently: 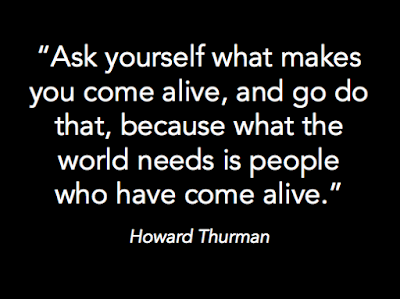 Since I have been open and honest with myself and with others about what makes me come alive, I have heard the most remarkable things from people--mostly dreams they have...things they would do, "if only..." If only... I love hearing those stories. Even if part of me is sad when I hear them prefaced the way they always are. The way I used to preface things.

I know now that I have always been a distracted lawyer. But I also know that this morning, I almost missed both of my train stops while finishing Of Mice and Men (I started it Monday). The entire world melted away as I circled vocabulary words and particularly-gripping passages that I can't wait to discuss with my high school English classes. I felt so deeply alive. Cancer was completely pushed out of my mind. It was amazing.

I will take a six-figure pay-cut when I leave the legal profession and return to teaching. It will be okay because Brian and I will work hard to ensure that it is. Plus, excess money, while lovely, has never made either of us feel alive. Ultimately I know that I will never review a contract or sit on a corporate conference call without a million other thoughts or ideas popping into my head and begging me to play with them. But I know that I will walk into my classroom every morning focused on what I'm there to do...teach kids about literature and history. And more importantly, help them try to discover what makes them come alive. Because Howard Thurman is so right about what our world really needs--lawyers who aren't distracted by the paint on the wall, and teachers who pack up their classrooms in June with a fire in their belly about coming back in the fall. I so miss that fire....and I so should have been working in the 45 minutes that it took to write this....
Posted by Tara at 5:05 PM 2 comments:

Today I find myself feeling heart-broken over the news that a young man from my hometown died of a drug overdose last night. I knew this young man only well enough that we would say hello in passing in the school hallways or around town. I can still hear him calling me "Miss Talbot," and I can see him bowing his head with a sort of charming respect, probably because I knew (and adored) his older brother. I remember the last time I saw his mother—how proud she was telling me about her new job that she loved, how proud I was of her for being so strong even after she lost her husband to cancer.

I should be clear—this is not a blog about my hometown’s most recent victim of drugs. I don’t know enough about the victim, or about drugs, to write that piece. This is simply a musing of my sad and numb heart.

Since I made the decision to go back to teaching high school students, I have been following the news on the opiate epidemic in our area. I’ve read several articles, one as recent as yesterday, about families who have lost a loved one to heroin. Today I found myself rereading one such piece.

Over a month ago, I read an article in my local paper about the growing opiate epidemic. Three individuals were interviewed in the article. One gave his name.

When I read this article back in March, I recognized the name immediately, and could even visualize Mike B. in my classroom. I remembered where he sat and what his hand-writing looked like. I remembered his spirit and his never-hidden smile. I remembered his kind soul. When I read Mike’s admissions about his use of drugs, my heart sank. How could this happen? How could someone so sweet get mixed up in something so bad? I was asking these questions rhetorically but also because I wanted the answers.

In the article, Mike talked about losing his younger brother to a drug overdose in 2013. He talked about his own addiction and the pain it caused others. He explained that he had been drug-free for over one year now, although the rest of the story was still an ugly one. Jail. Psychiatric facilities. Guilt over his brother's death.

After I read the article, I wrote to Mike. I told him how brave he was. How proud I was of him for sharing his story. I wondered if I would be as brave as he was if my story of struggle wasn't such a socially acceptable one.  I honestly don't know.

Don’t get me wrong, I am deeply proud of my blog and my book. Those represent my story and in a way, they are living beings to me. But I don’t think I’m brave for sharing them. By sharing my writing, I get only good things in return—emails and texts with words of great support and kindness, interviews with amazing people, invitations to speak and receive awards. But the ones who share the “uglier” stories—stories about heroin addiction, for instance—they risk attaching themselves to a potentially hurtful stigma. A parent brave enough to talk about his or her child’s drug addiction risks judgment (“What did they do wrong that made him become a drug addict?” Answer: In many cases, nothing.). A young ex-addict courageous enough to share his story risks people turning the other way—both on the street and in his life. Even I admit, part of me is scared of people who get mixed up in drugs.

Right now I feel heartbroken for a young man’s family who will need to bury their son, brother, and friend before he had a chance to live his life. I feel overwhelmed by a drug epidemic that is killing our youth, or at best, limiting their potential and their happiness. I feel scared for my own children and for the students I will teach next year. And then there’s that pride and appreciation I feel for people like Mike. People who have pulled themselves up from life's depths and found the courage to talk openly about a problem as ugly as drug addiction. Clearly those stories can’t save everyone, or even most people who fall, or jump, or tiptoe into the deadly grasp of drugs. Those stories can't comfort families who have lost a loved one, or families who know they are in the turbulence that will likely lead to that loss. But those stories are the only place I find hope in tragic moments like this one. Because I don’t know what it’s like to try opiates for the first time or become addicted to them. But I believe that the people who can best lead our communities to the bottom of this seemingly boundless problem are those who do. And those who have the strength and the courage to have an honest conversation about it.